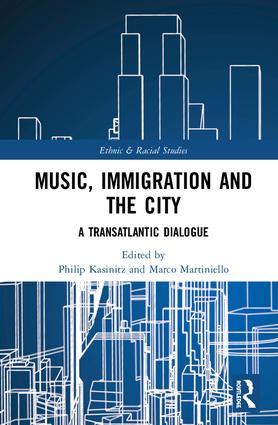 « This volume brings together the work of social scientists and music scholars examining the role of migrant and migrant descended communities in the production and consumption of popular music in Europe and North America.

The contributions to the collection include studies of language and local identity in hip hop in Liege and Montreal; the politics of Mexican folk music in Los Angeles; the remaking of ethnic boundaries in Naples; the changing meanings of Tango in the Argentine diaspora and of Alevi music among Turks in Germany; the history of Soca in Brooklyn; and the recreation of ‘American’ culture by the children of immigrants on the Broadway stage. Taken together, these works demonstrate how music affords us a window onto local culture, social relations and community politics in the diverse cities of immigrant receiving societies.

Music is often one of the first arenas in which populations encounter newcomers, a place where ideas about identity can be reformulated and reimagined, and a field in which innovation and hybridity are often highly valued. This book highlights why it is a subject worthy of more attention from students of racial and ethnic relations in diverse societies. It was originally published as a special issue of Ethnic and Racial Studies.«